...this is my Palos Verdes Half Marathon recap and review.

Saturday morning I ran the Palos Verdes Half Marathon in Palos Verdes, CA. I paid $80.00 to sign up.

Packet pick up was the Friday before at Road Runner Sports in Torrance or the morning before the race at the race site.  We didn't get a "packet", just our race shirt, timing chip and bib.  The bibs were the standard Road ID bibs.

The shirt is a short sleeved tech shirt with the race logo on the front and sponsors on the back.  They are unisex sized. I ordered a small and it's still big.


The morning of the race I stayed in Long Beach and left the house around 5:00am.  I made it to the parking lot in about 30 minutes so I was WAY early!

Due to limited parking at the Start/Finish area we had to park at the RPV City Hall and take a shuttle bus to the start.  There were signs on the main road directing us where to turn for race parking. Since I got there so early I had no issues finding a parking spot and there were 4 shuttles waiting.  It was about a 15 minute drive to the start.

Once I arrived at the start I still had over an hour before the race started. I stretched a little and watched the sun come up. 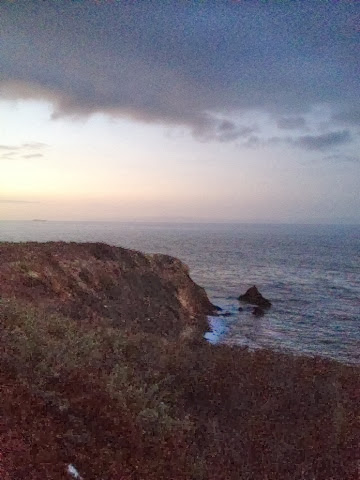 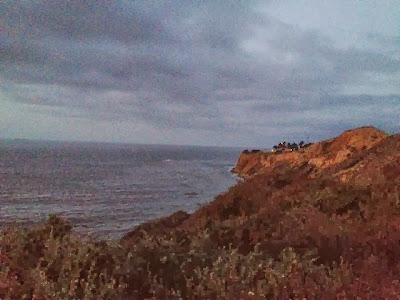 People who didn't pick up their packet on Friday had to find their number on the board. 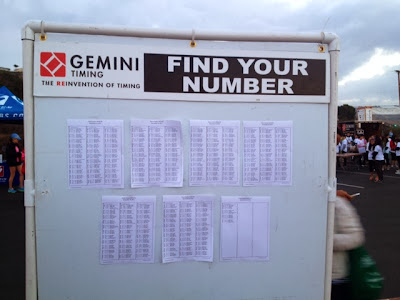 There were tables set up and they were still taking registrations that morning. 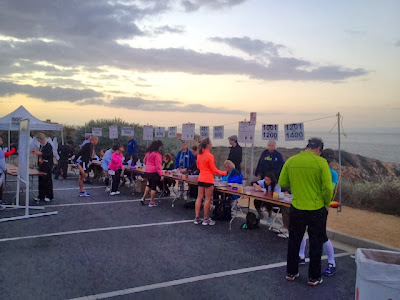 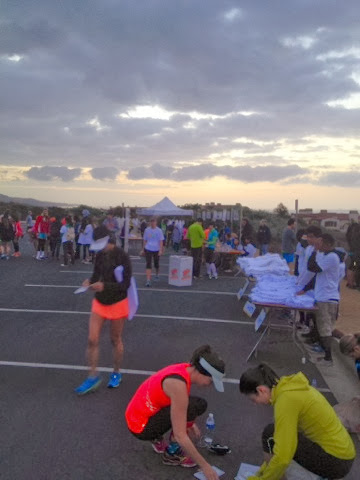 Here I am before the race. 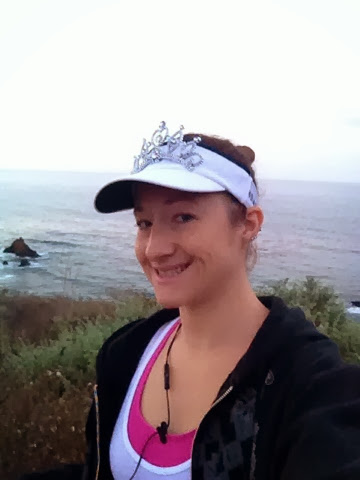 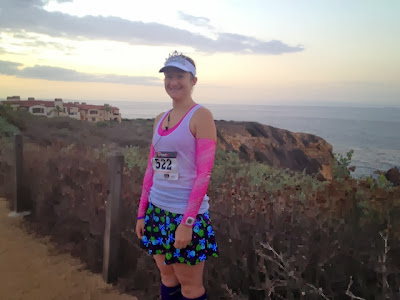 It was a little cold before we started so I'm glad I brought a sweater. There was a bag check available so I was able to check my jacket and pick it up after the race.

We lined up at the starting line right before 7:00am and we were led in some stretches before we started. After the Star Spangled Baner was played we were off. It was probably 7:10am.

The course was beautiful! 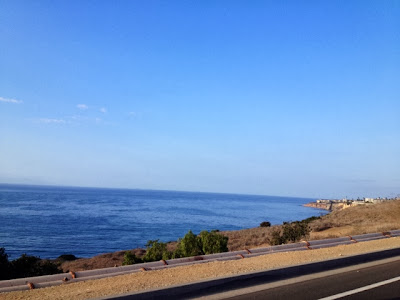 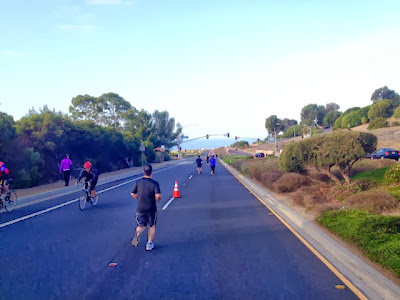 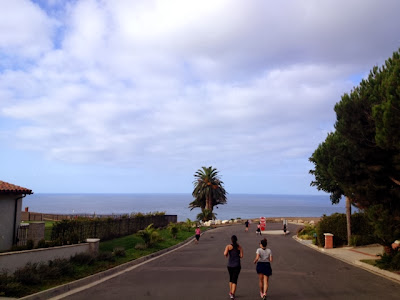 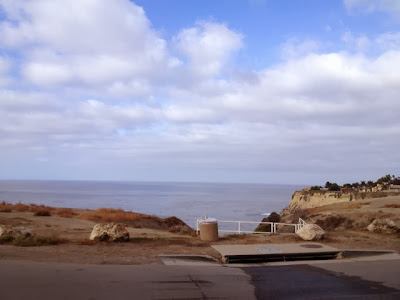 I could see the ocean for most of the race. Here I am at mile 7. 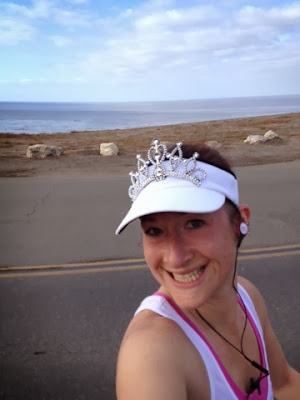 It started warming up so I took off my arm sleeves and stuffed them in one if the pockets of my Sparkle Skirt. I love these skirts and all their pockets and they come in the cutest patterns!


Here a few more photos from the course. 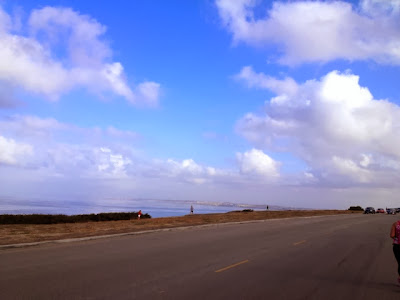 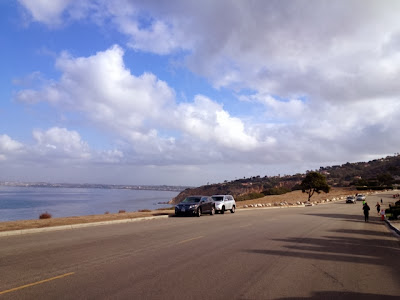 There were plenty of water stops along the course that also had Gatorade, bananas, and power bars. The only thing they didn't have were Cliff Shots but luckily I had brought my own.

The course was pretty hilly but it really wasn't too bad. The upside was you could really make up time going back down the hill. And it was a nice down hill sprint to the finish line.

The medal was pretty nice for such a small race. After checking the results, 605 people completed the Half Marathon. 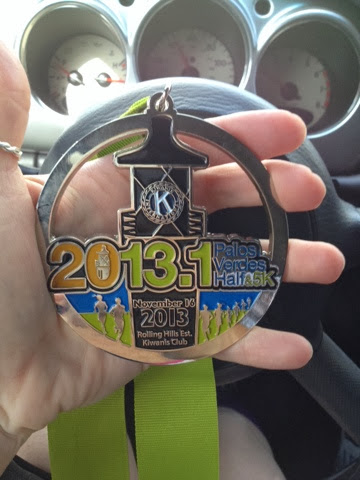 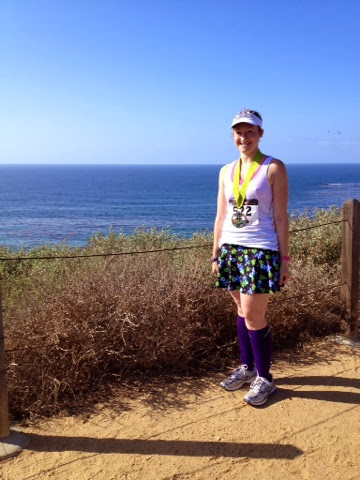 There was a small finish line festival at the Resort. I would say maybe 10 booths. But there were plenty is samples, SoyJoy bars, coconut water and yogurt to name a few.

It was a short walk to the shuttles after the race. I was able to board a shuttle bus right away and had no trouble leaving the parking lot and getting back to the freeway.

Overall I really enjoyed this race and although I was worried about the hills and  the fact that it such a small race I had a great time and I will definitely run this race again.

My official time according to race timing was 2:54:04. Not too bad considering all the hills! 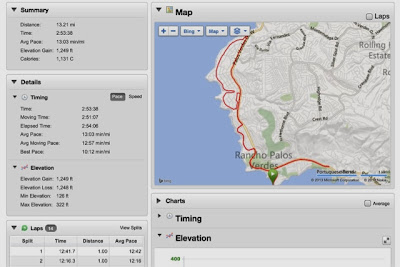 If you have any questions about the race leave me a comment and I'll get back to you.