The past 7 days have been rather un-eventful, which is a good thing!  I’ve been trying to eat different foods besides soup and applesauce.  We had Blaze Pizza (for the first time) on Sunday.  I had to cut it up into little pieces because there is still so much pressure on my teeth that I couldn’t bite it.  Chewing was a little hard with the rubber spacers and it took forever just to eat half of it but I managed.  Luckily it was a single restroom so I didn’t feel too weird brushing my teeth after I ate.

I went to my appointment on my lunch break again.  This time I was out in less than 30 minutes.  No lose brackets!!  They started by removing the purple rubber spacers.  Some were still tight so there was a lot of pressure when they were pulled out.  Next she held different size molar bands against my teeth until she found ones that fit.  There was a lot of pressure as each one was pressed on.  I then had to bite down on some kind of tool at all different angles that felt like it was positioning the molar band correctly.  After 3 were installed she asked me how they felt.  They were fine but one on the top I could feel against my gum so she lowered it a little bit.  Then told me she was going to take them all off so she could glue them on.  There was just as much pressure taking them off as putting them on!  After drying the inside of the bands she spread some type of cement/glue on the inside of the bands, dried my tooth and pressed in on again.  They went on much easier.

I had one molar on the bottom where the space was still too tight to fit a molar band.  I now have a metal spacer.  Basically she twisted a piece of wire together between my teeth.  Once again there was a lot of pressure but no pain.  I have to go back in 1 week to get the last molar band installed and then it will be monthly appointments.  They left the same wire and rubber bands on.  Once I have all 4 molar bands they will install a new wire that attaches to the molar bands.

As I was leaving, the assistant asked me if I had received my kit last time.  Nope, I had not received a kit.  I was actually going to ask about it since my boyfriend got one from his orthodontist and I hadn’t.
The kit included a toothbrush, floss, floss threaders, a travel toothbrush, a dental mirror, a timer, wax and a little brush.

I can already tell that these molar band are going to drive me nuts!  The attachments on the side stick out more than the brackets and are rubbing my cheeks raw.  Wax to the rescue!  Other than that I don't notice them.

I have included a progress photo.  I know it's only been 2 weeks, well one since the re-install, but I want to see some movement!  If you've had/have braces how long before you could see a difference? 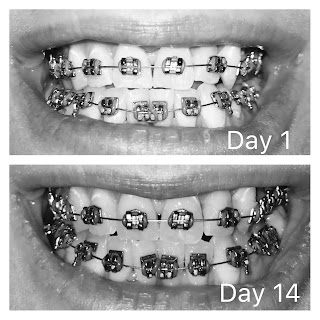 Email ThisBlogThis!Share to TwitterShare to FacebookShare to Pinterest
Labels: Braces