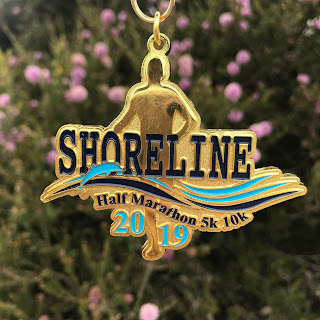 On Sunday, July 14th, 2019 I ran the Shoreline Half Marathon in Ventura, CA.  This was my first time running this race.  I was going to be in the area later in the day for a family BBQ so I figured I might as well head out early and run beforehand.

Ventura is about a 2-hour drive from my house so I was glad the race offered free morning-of packet pick-up.  I left my house at 4:30am to make sure I’d have time to find parking and get my bib before the 7:15am start time.  There were several parking options listed on the e-mails I received ranging from $10 parking at the start/finish line to further away free parking that included a free shuttle.  I had planned to try and get parking at the start/finish line for $10.00 but as I got close, I noticed people parking along the street in front of the Ventura Beach RV Resort.  I didn’t see any no parking signs so I parked there too.  It was a less than 5-minute walk to the start/finish line and I was in line to pick up my bib by 6:15am. 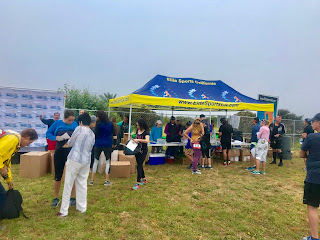 There were only 3 people in line in front of me for packet pick-up.  We received a reusable tote bag, shirt, water bottle and granola bar.  I asked about a gear check and the ladies handing out bib said they weren’t sure if there was one.  I walked back to my car and put my swag bag and jacket away.  It was 60 degrees at this time.  When I returned, I used the remaining time to use the restroom and take a few pictures.  There were 7 Port-o-Potties as well as free standing camp restrooms.  At 10 till 7:00am they announced that the gear check was now open. 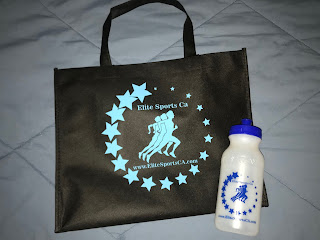 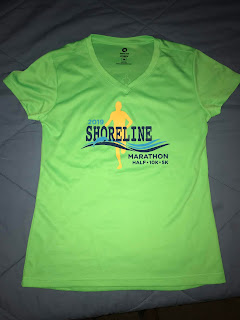 The marathoners started at 7:00am with about 100 people.  At 7:15am the half marathoners started.  The corals were self-seeded but a few minutes after the first group took off all the rest of us did too.  There were just under 300 people running the half.  There was a 10K and 5K as well. 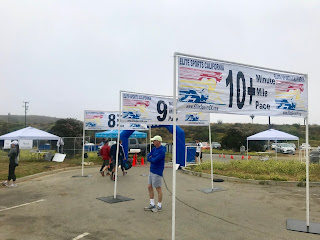 We started out on the bike path and ran north along the coast.  Eventually we were just running on the side of the road.  At times the view was blocked by houses or RV's parked right on the edge of the street. 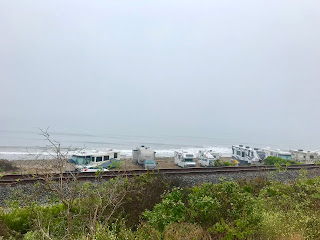 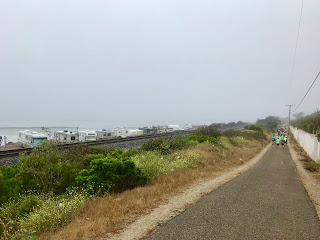 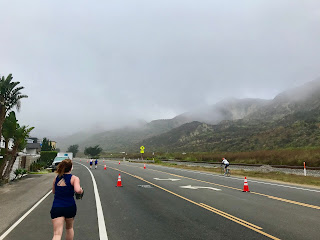 After running 6.55 miles we turned around and ran back down the way we had come.  The marathoners ran this loop twice.  The aid stations had water and Gatorade and were spaced out about every mile.  There was no nutrition on the course. 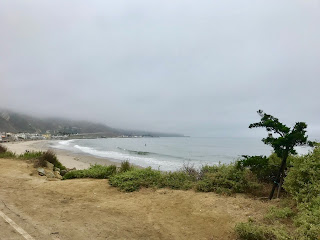 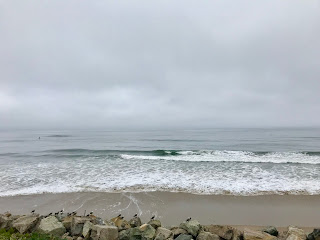 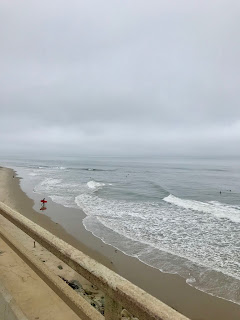 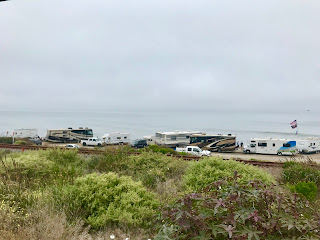 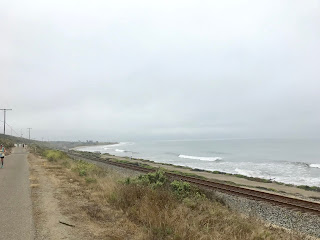 After crossing the finish line, the medals were just laid out on a table so we had to grab our own.  The same thing for the water, just bottles sitting on a table.  After walking back toward the packet pick-up table, I found bananas and granola bars.

Included with our race entry was a plate of street tacos and a free beer.  I’m not a beer drinker but it looked like there was 805 and a citrus IPA.  I did take advantage of the free tacos and had one chicken and one carne asada.  After I ate, I had someone take my picture in front of the back-drop and then I was out of there by 10:15am. 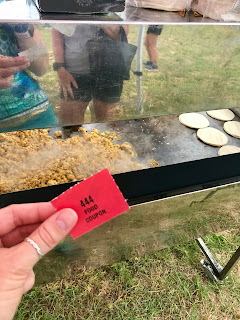 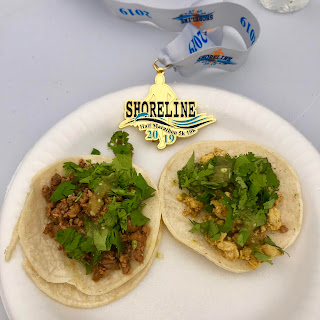 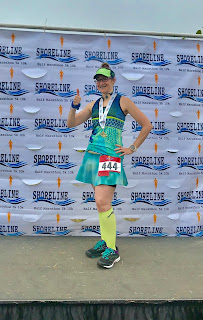 There were several photographers at the starting line and on the course but the race photos were not free.

Have you run the Shoreline Half?  What did you think?
Posted by Sarah Says at 11:01 AM